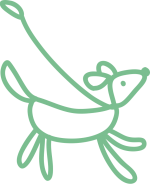 When it comes to house-training an older dog many of the same concepts apply as with a puppy. The difference is often you are trying to undo a more rehearsed behaviour, rather than establishing a new one and so it may take a more regimented approach – especially at first.

It also pays to eliminate any medical issues – not only bladder infections that might result in incontinence but also your dog being on prescriptions with a side effect being excessive urination or sudden bowel movements.

You need to be consistent about meeting the dog’s physical needs and have a good set of plans in place to cover the general situations that arise day to day.

We can housetrain dogs because they instinctually don’t soil a den. An untrained adult doesn’t understand that where our den is. So we teach them our whole house is a den and set them up to go in the right place on cue by:

PLAN ONE – For while the dog is the focus of attention—say in the lounge with you (but not when you have attention focused on something else).

Anticipate the times they will need to relieve themselves—just like babies—after waking, after meals, after intense activity, after long drinks. And take them out to the place you want to use. Sorry but you must go too—not place them out and shut the door. Keep them on a lead at first so there is a focus on the task, not a play time in the yard. Be a tree as much as possible so they are attracted to sniff and get on the task.

Have a cue ready to say quietly as they are actually going at first. After a few days try saying it as you get outside in anticipation of action. I recommend 3 treats for success—after all it makes me three times happier! Now they have earned freedom and can be let off lead too.

If there was no action within 5 minutes (even when on lead) then take the dog back inside and confine them as per plan two for 10-15 minutes before you repeat the process.

PLAN TWO –  This is when you will be distracted and for short term confinement. A crate is seen by many dogs as a kind of indoor den and should be placed in a “people place” so they are not isolated. Other options are a tether attached to the skirting by a bed, baby-gating an alcove, an Ex-pen with bedding laid down or attaching a lead to your belt as you move around.

PLAN THREE – For when you go out or longer periods alone. This is about being realistic and is best if different from the short term option—move and then open the crate door and put paper down in a small easy-clean room or create an outside pen and kennel and leave them there.

PLAN FOUR - For when you find an “accident” in action – interrupt the dog with a sharp noise/spray and propel them outside – put on lead. If you didn’t see it, then you are too late! Be grumpy at the cleaning, not the dog. Growling now or rubbing their nose is cruel and most likely teaches the dog to seek better privacy—in the next room or behind the sofa.

I recommend clean-up with lots of water, then mild detergent and vinegar rinse. Do not use NOT Ammonia-based products like HandyAndy. These attract the dog to mark again over top. Some citronella deterrents can be sprayed to discourage remarking or a liberal dose of white pepper on a carpet spot discourages the dog from returning to one place at least.